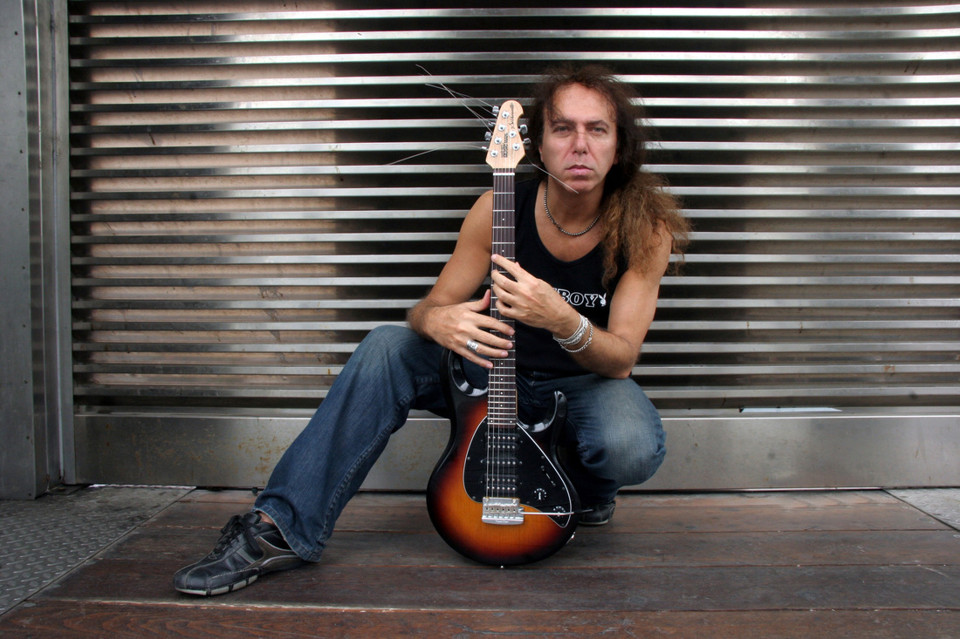 Guitarist Alex Masi spoke with Alex Pompili journalist for Tempi-Dispari; Italy’s source for rock star interviews.
Alex Masi from Venice, Italy studied at the Conservatory of Music in Verona, Italy. In 1986, Metal Blade Records moved Alex to Los Angeles where he joined the band Sound Barrier. He was Grammy nominated in 1989 for Best Instrumental Rock Album with the opening track, “Under Fire,” including vocals by Jeff Scott Soto. Other guests featured on this recording include Frankie Banali (Quiet Riot), David Michael Philips (King Kobra), Kuni, and Allan Holdsworth (one of Masi’s heroes). Alex Masi’s second solo album was called Vertical Invader, and featured only Masi along with drummer John Macaluso. There are over 20 albums in Alex Masi’s Discography ranging from 80s rock to a trilogy dedicated to classical musicians Bach, Mozart and Beethoven.

What would you say has been your method or approach to music?
I’ve always taken music as a magical trip into an unknown land, I wanted to be partially prepared but also wanted to leave some things to chance. Now that I’m older and way more experienced than when I started I can’t help maneuvering with some dexterity but the child is still there inside me and I enjoy the purity of the creative process without letting the business side of things pollute the Joy of making music. I don’t really have a method, I just let it flow and try to capture it without getting in the way of the process.

When you first located to Los Angeles, California from Venice, Italy in 1986, you apparently found something very inspiring in order to receive a Grammy Nomination after just three years. Can you reveal what that inspiration was?
I don’t think the Grammy thing was the result of any particular inspiration, awards and all that stuff don’t mean that much in terms of actual music. It was nice to be nominated, got a lot of more exposure thanks to it but the album that was nominated was recorded without thinking about any of that stuff, it was just me and the other musicians in the studio making some wild music that I never thought I would never be allowed to publish on a major label. It wouldn’t happen in today’s market.

Carmine Appice, Mick Sweda and Chuck Wright worked on Black Roses with you. How did you like working with them?
Carmine was a blast to work with, he was the man responsible for getting john bonham his first drum endorsement, he played with jeff beck etc super nice guy and funny as hell. But the highlight of that recording was Mark Free, what an incredible singer! I would have loved to do more work with him. Now he’s a she but that doesn’t change a thing for me and I would still be thrilled to record with him/her.

You record a lot of your albums by yourself since you can play a variety of instruments. Do you prefer recording independently, is it a more creative process when you work on the idea by yourself?
I enjoy working with other musicians and I enjoy doing it alone as well. Having a band or other guys playing with you makes for a more spontaneous effort but doing it all by yourself allows one the freedom to explore the deepest parts of your imagination without the fear of hurting anybody’s feelings. Music, art are not meant to be democratic, they’re expression of individuality. Plus working by myself while being a lot more time consuming also allows me to fine tune every single aspect of the music as close to,perfection as possible. But I’m looking forward to working with a band in the near future after having recorded a few albums completely alone.

You’ve played with many talented musicians. Is there anyone you haven’t played with that you would like to?
Oh god, so many! Some are dead some are still around, Jaco Pastorius, Joseph Zawinul, Miles Davis, Hendrix, John Bonham, Robert Plant, Steve Winwood, Zappa, Allman Brothers, Zakir Hussein, Billy Cobham, James Brown…on and on and on.

How were you able to network or make friends in Los Angeles when you first located there without a Facebook type of tool? Did you speak English? Did you already have friends there or how did that work?
I was invited to LA by a record company so I had already something to rely upon when I got there. My English wasn’t that great back then but it got increasingly better, the fact that the internet wasn’t around back then wasn’t a problem, it actually made relationships a lot more real and solid, I’m not a big fan of the social media thing. I notice I had a lot more actual friends before the internet even if now I have thousands of supposed “friends” on those sites…

You have some favorite musicians like Glenn Gould, Shawn Lane and Allan Holdsworth. What is it about these musicians that inspires you?
Their individuality, creativity, personality. The fact that they didn’t try to sound like someone else but they’ve been trail blazers who carved their own place in the universe regardless of other people’s expectations. Greatness is rare, there are thousands if not millions of so called artists around the world, actual geniuses are easy to spot, they hit you hard and you never forget it.

The ability to translate classical musicians like Bach, Mozart and Beethoven to guitar is impressive. What exactly was challenging you to interpret their music to guitar?
I wanted to record and play music that wasn’t written for the guitar. That was the challenge. Not enough notes on the fretboard and not enough fingers. I had to come up with tricky strategies to make it work and that was exciting. There are parts of some of the Beethoven pieces I’ve recorded that are just mind blowing to play on the piano, to play them on a guitar is like science fiction but with some planning I made it work.

You spend time in both Los Angeles, California and your childhood home in Venice, Italy. Do you have plans to settle in one of these two areas or is this your ongoing routine for the creation process?
Life is constantly changing and the verb “to settle” doesn’t really seem to apply in my case. To be honest my dream would be to eventually move to an island on the Pacific Ocean, something like moorea, and spend the rest of my days there. I love the ocean, sunshine, fish and tropical settings, the European doom and gloom type thing gets old quickly for me.

What are your future plans for music?
As soon as a few things calm down in my life I will start recording a new solo album, I’m also working with a band that includes some guys from my past and we’ve been writing some great songs together. I had to turn down some invitations to join some pretty big bands due to family situations but maybe that’s for the best as I’ve never seen myself as a hired gun…unless it’s someone like Robert Plant or something that amazing.

It is interesting to note that during the mid-80’s you received a Grammy nomination for an instrumental album when glam and hair bands with anthem style lyrics
In the 80s there was a lot more focus on music in general and the hair glam band thing wasn’t the only game in town, there was room for a lot of things unlike now when the whole market is saturated by bubble gum crap and cheesy hip hop. I’ve recorded one or two albums back in those days that had some of that hair metal vibe going, it was like a game to play in those days, just fun, nothing deep. I don’t regret it but it’s something that I don’t care about bringing back for sure.

What did you like or dislike mostly about the 80’s style of music?
80s were more than just glam rock, metal and hair bands. There were some amazing bands and musicians around doing all kinds of styles of music. I’ve always been listening to a very broad range of music, I can’t understand people who will just listen to one single type of thing, I would rather not listen to anything at all at that point. That decade allowed a lot of freedom to musicians, something that has pretty much disappeared now if you want to exist in the music business. After that in the 90s it was like was the beginning of categorization of different styles so you had the punk kids, the metal dudes, the disco crowd, the alternative freaks etc and they wouldn’t stray from their chosen styles now that syndrome has become a plague and people are just programmed to stick to their style of crap and aren’t at all curious to check out different things.

What can we expect to hear from you next. What project are you working on now?
One solo album and two band projects that I will reveal in due time. All of this will take as soon as things get a bit calmer in my life.

With the popularity of the 80’s happening now, is it possible we could see a more 80’s style album come from you again? Do you miss that era at all?
I don’t do nostalgic trips, I’ve had a lot of fun during those years but it’s the past and I need to live in the present for my own sanity. To try to resuscitate a style that belonged to a completely different place in history is kind of grotesque in my opinion. Sad as well. It means there’s nothing new and valid to say today and at that point I think it’s better to do something else like fishing or whatever. If Hendrix were still alive today he wouldn’t try to bring back the late 60s, he would be still pushing forward because that’s the spirit of a true artist.

I want to ask you the same thing I am asking others because it is a profound occurrence now.  Why do you think the 80’s are re-igniting? I mean, it is like it’s 1985 in Colombia, South America; it is happening here in Italy and it is apparent all over the world that the 80’s and even the 70’s rock styles are becoming enlivened again.
As I said, I’m not interested at all in bringing back the past. Any form of revival I find sterile and it stifles actual creativity. Name any great artist from the past and you’ll see that he or she were innovators not necrophiliacs. If there is such demand for the 80s to be revived it means nothing valid that’s new is being created and the cure for that is not digging out spandex and hairspray but digging inside our souls and painstakingly give birth to new ideas. Anything else reminds me of when I was a kid and I used to see all those goofballs trying to relive the fifties in the 70s…man, they were pathetic.
Much love
Alex Masi

Spoil Engine, “We don’t feel that music should be a competition”