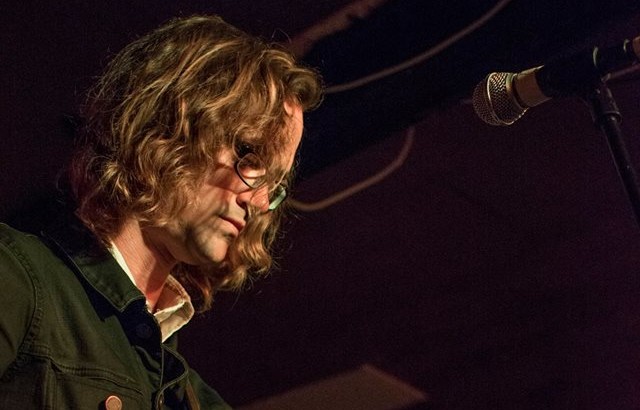 Words by Londa R. Marks
In the small college town of Marietta, Ohio, Adelphia Music Hall was the setting for one of the most unique vocalist’s I’ve heard in a long time. Seth Riddlebarger with Athens, Ohio, rock band HEX NET, was commanding a performance to a club packed with college kids and locals.  Sitting at a table with family members and friends not expecting to hear extraordinary talent Seth began to sing and play guitar which compelled me to find my way through a wall of people and to the stage to see who this was. Rubber Legs, a bluesy song, seductive and sensual, was the enchantment. Seth sings from heart and soul on every song but this song was the draw for me. His eyes were softly closed obviously in the zone of a song he so humbly offered with love and passion.

Seth is a songwriter, vocalist and guitarist rarely doing cover songs, though his rendition of Bob Dylan’s Lovesick is, well, better than Bob Dylan does it, in my opinion. And, I don’t want to compare Seth to anyone because he really is his own entity, a one of a kind like Steve Marriott was but there is certainly well crafted 60s and 70s influence in his music. Hex Net even considers themselves to be in a 70s category of psychedelic rock ’n roll. The band does not rely on props or effects. They don’t need it. Their songs are strong and vocalized with pure, raw heart and soul. Seth is mesmerizing. Hex Net music is addictive.

When I returned to my studio in Florence, Italy from visiting my home town of Marietta, Ohio and after listening to Hex Net music non stop since I saw them, I posted some promotion for Seth on my Facebook page, friended him and asked him for an interview which he graciously and ever so politely agreed to. His is the type of talent that should be exposed, should be known, should be experienced, and yet there is a part of me that does not want to take Seth and Hex Net from that small town energy because of how it has nurtured his peerless talent. I fear polish and groom may seep into him and the band from making it big in the music arena and dilute this Seth Riddlebarger magic. But if anyone deserves to be known for their talent Seth does. It did not stop Steve Marriott from being Steve Marriott and somehow I know it will not stop Seth Riddlebarger from being Seth Riddlebarger.

Timeless artists always feel that they could have done things differently or better on projects. But from an onlookers perspective these types of artists are generally quite effective in expressing insight, emotion and sensitivity. This is not something learned, it is something the artist is born with and stays with the artist throughout their life – as long as they caress it like it is a magical treasure. Seth, you have said the same thing about your album, Future Holds that you would’ve liked to have done some things differently. For me, the album is impeccable but, what do you think you will do differently on your next album?

Seth Riddlebarger: The band was very new when the first record was made. Since then we’ve gotten a new drummer and keyboard player, and done some touring as well as a lot of local shows. The next record will reflect what we’ve learned playing together on stage live. More up tempo and a tighter feel. The songs are all written, we just need to get back into the studio.

“Playing live affects how I feel about the songs and it is all performed reflecting how I’m feeling and how the crowd is feeling,” you have said. This is also a Michael Schenker approach who has indicated that he always plays what he feels rather than by what he has memorized because anyone can be technical. That approach you take is likely what appeals to me about you in that you were playing genuinely from the heart. Sensitive artists tend to function best this way and produce stellar results felt by the audience. This also relates to longevity of their art/music. Adelphia Music Hall in Marietta must resonate well with you because it was an outstanding performance that ended too quickly for me. The guitar you use fits you and your music perfectly, of course. The sound is transcendent. What is it about a Gibson F-hole guitar that you like? Also, I have to ask you what year is it? You seem to be someone who would connect well with an older model because of the quality of wood and how it would affect your tone and how and what you want to say with it.

Seth Riddlebarger: The guitar I play most of the time is a customized 97 Gibson ES-135. While I have other guitars, I keep going back to this one. I’ve had it for fifteen years and just love it. I played in a band called Dragline Bros. for years and that’s the guitar I used with them.

Your music is categorized under Psychedelic Rock ’n Roll on HexNet.BandCamp.com. Psychedelia (according to Wikipedia) is “derived from the experience of altered consciousness that uses highly distorted and surreal visuals, sound effects and reverberation, and bright colors and full spectrums and animation to evoke and convey to a viewer or listener the artist’s experience while using such drugs.” That is almost a fairy tale and fantasy atmosphere which I do feel describes your music well in that it is mentally visual and provokes imagination and emotion. Music is certainly like a drug for many people. It helps us to be more in tune with what we are feeling and brings feelings to the surface in a romantic and poetic way while becoming lost in another world.
That is what I like so much about your music, your voice, your attitude toward music. You have the ability to present that world (song) very effectively and creatively not only with your vocals but with your unique guitar style and tone.
The coziness of a small town like Athens, Ohio, where you play frequently at The Union, may allow for an artist to feel secure enough to reach farther in cultivating their art than a big town lifestyle would. So, how do you reconcile such deeply felt art with planning for worldly success? Or, do you take the same approach you do with your shows, not using a set list (a map), but are going by what you are feeling at the moment and reflecting life’s (audience’s) energies?

Seth Riddlebarger: I live near Athens, because I grew up near there. While we like to go and play shows in bigger cities I prefer to live in the country. Athens has always had a good rock scene. There are always great local bands, and a lot of touring acts come through town. The Union unfortunately recently burnt down. I try to focus on making music that I enjoy performing over what I think would be successful. And yeah, we don’t use set lists. I react to the environment. I try to get into a trance state when performing, its a way to deal with nerves and rise above myself, channel the room. Sometimes that might mean playing a shorter set, not necessarily because the crowd is bad, but, because its what feels right for the moment.

Living in Athens, Ohio, must also be inspiring because of the youthful energy and culture that small college towns have. You seem sensitive to life taking it all in and rephrasing it so beautifully with music. But what is your dream? And what is motivating you to move towards your dream?

Seth Riddlebarger: Athens can get really crazy with the college partying. While that makes for a thriving nightlife bar scene, it can also about drive you crazy. Which is why, as I’ve already mentioned, I now live about ten miles from town, in the woods, with few neighbors. I can be as loud as I want or just appreciate the quiet. As far as dreams go, I’d like to continue playing, writing, and recording music, as well as going on the road. As long as I’m still being productive I’ll be happy, whether or not other people get into what I’m doing; although I’m definitely motivated by positive feedback. I’d really like to be recording more often than we have.

Of course everyone wants to know what inspires artists. So musically, who are the frontrunners for you and why?

Seth Riddlebarger: I’ve always been a big Mark Lanegan fan, whether its with the Screaming Trees or solo. I’m into just about anything Greg Cartwright does. I think he’s one of the best song writers. I love Iggy Pop, Flamin Groovies, Velvet underground, The Stones, The Gories, Buck Owens, and the list goes on. Mostly though I’m into local bands, from Athens region, like Appalachian Death Ride and Weird Science. The rock and roll shows in Athens are great fun.

Hex Net debut album Future Holds has been released on vinyl because both you and bassist Tim Peacock like the warm sound of vinyl as many people do these days. I prefer it as well probably because it has not been polished to the point there is little soul left of the original intention. But, the warmth you mention is what exactly in your mind? And, are you selling more vinyl as compared to download versions of your music?

Seth Riddlebarger: I just personally prefer analog recording gear, and I think vinyl is a good medium for it. It’s what I’m comfortable with. I don’t have any problems with digital recording, but I think mp3’s sound thin and bad.

Future Holds album cover is unique. What is the story behind it?

Seth Riddlebarger: That’s Tim’s front yard, with a darkened sky and the Hex Net like the moon. With the darkness of the record and the bone alter, it just fit with the record.

You’ve been playing since you were age 15. Is this around the time you started writing your own songs?

Seth Riddlebarger: Yeah I started writing when I started playing. When I practice now I’m usually trying to come up with my own stuff. It’s the reason I play. The high you get from creativity, there’s nothing like it.

You have mentioned that you do noise-improv stuff too – which is exactly what it describes – but if you would, elaborate on how you do this and if you plan to you use any noise-improv in upcoming albums? This also causes me to wonder about any other types of creative interests you may have such as photography, painting or drawing.

Seth Riddlebarger: The noise-improv stuff for me started because it was a way to mask my lack of ability as a lead player. Now, i think i incorporate it into songs to convey emotions or textures I cant get from conventional playing. Sterling Morrison was a big influence. When I’m not playing music I’m knee deep in horticulture.

Are you writing new songs now and preparing for a new album and tour such as playing in Italy or anywhere in Europe?

Seth Riddlebarger: We are preparing for a new record and we would love to tour Europe an Italy.

Thank you for taking your time to work with me on this interview Seth. More importantly, thank you for the extraordinary gifts of music you contribute. It is always a good day for me when the ‘gods’ send me unique music like yours.

Seth Riddlebarger: Great talking with you Londa. I really appreciate your interest and nice words. Cheers!

Hex Net music can be heard at: HexNet.BandCamp.com

Hex Net – The Island (Live at The Union)
https://www.youtube.com/watch?v=GKA5Mdo6ypw 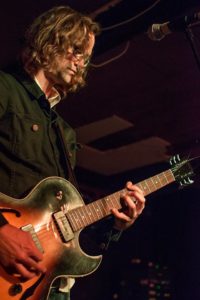 Betsy Weiss talk about Bitch, past and future

Alex Masi: from Venice to L.A. to make music history